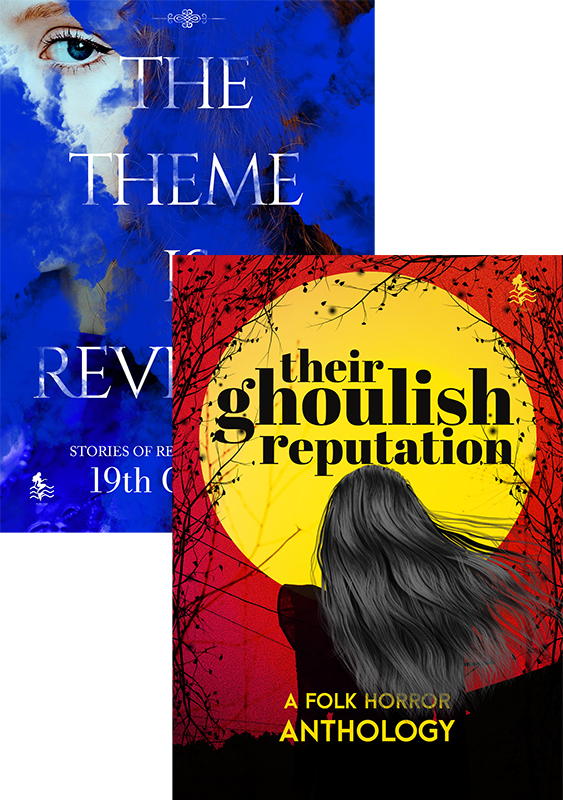 Their Ghoulish Reputation / The Theme is Revenge

From the origin story of Baba Yaga, to a monster named, Jenny with iron teeth. A woman buried alive in the bog thousands of years ago, lives on, stealing the bones of anything she touches. A mysterious cave imparts on a group of twenty-somethings a curse that leaves the affected with an inescapable chill. A mysterious old woman rewards a kind sister and punishes a callous one, but over time, the gift provided to the kind sister becomes more and more unsettling. A wolf attack upsets the natural rhythm of life in a medieval English Village. Rumors abound that it is no mere wolf that menaces them. From A tale of a family cursed by a previous mistake in the modern-day retelling of welsh myth 'Llywelyn and Gelert,' to the tale of a small British village of Stegton, where three school friends discover a box of mysterious skulls in a local field. Aunt Sweetness, the Crickerwitch, one of the spirits who goes by thousands of names in the lore of the lakes, keeps coming back when the blue moon rises, answering a summons only she can hear, giving to some and taking from others, doing as she must to make sure her story never ends. When three teenage girls are murdered in a quiet Midwestern town, the rumor mill begins to swirl. Was it an escaped convict, spiteful classmates, or something more sinister?

Combining the elements of literary horror and folklore, 24 masterful authors from around the world present terrifying tales of folkloric madness in this anthology of folk horror, Their Ghoulish Reputation.

Dark Lake Publishing LLP presents The Theme is Revenge, an anthology of revenge stories set in the 19th century. Stories of the wounded, who are out to wreak vengeance on their villains who did them wrong.

From the reimagining of Robert Browning's Porphyria's Lover to the tale of a humiliated wife's deadly retaliation. From 1860s New Orleans, where a brothel worker plots revenge against the brothel owner, to 1857s Texas, where some strange and unexpected events took place with an unusual female hunter. Armed only with a well-crafted plan for revenge and an apothecary bag, a doomed man pursues the monster of responsible for the death of his family, and he will stop at nothing to right the wrongs that define his very existence.

A chilling collection of powerful and atmospheric tales, The Theme is Revenge is written by some exceptionally talented authors of the horror community.

To be the first to receive updates on new releases, deals,
giveaways and more!